In this era of fast-paced technology, more and more organizations and teams are moving towards agile practices with rapidly evolving software development lifecycles. With that, Continuous Delivery (CD) has become a major part of the DevOps process, where the whole software release process is automated—the build, the testing, the deployment.

With the popularity of Kubernetes for developing containerized applications, the need is growing for a reliable continuous delivery platform with native support for deployments on Kubernetes clusters.

In this article, we will explore Spinnaker, one tool that facilitates integrating Kubernetes into a CD pipeline.

Spinnaker provides the necessary tools to manage your code from commit to multi-cloud delivery with its powerful abstraction layer. 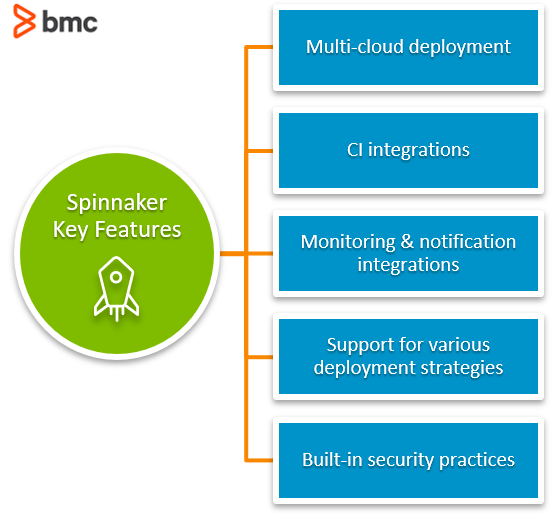 Spinnaker’s robust and automated release pipelines can be easily integrated with other tools such as:

This allows developers to effectively carry out various tasks from artifact collection to pipeline triggering.

Spinnaker can be easily integrated with monitoring solutions such as Datadog, Prometheus, SignalFx, and Stackdriver for metrics collection and analysis.

Additionally, you can configure Spinnaker to work with services such as Slack, HipChat, SMS to provide notifications.

Other features of Spinnaker, such as manual judgments and chaos monkey integrations, enable developers to review and test the deployments for instance failures before releasing them.

Spinnaker consists of two core feature sets that are helpful in the deployment:

The application management feature consists of all the necessary tools to view and manage cloud infrastructure. Spinnaker operates on a services model where multiple services are used to facilitate a product. These types of services are sometimes referred to as “applications” or “microservices.”

Applications, clusters, and server groups are the key components in the application management feature. They define services. Then, load balancers and firewalls expose those services to the wider world.

The deployment feature set creates and manages the continuous delivery pipelines. It consists of:

The diagram illustrates a simple CI/CD workflow that incorporates Spinnaker to build a container image and deploy it in a Kubernetes cluster: 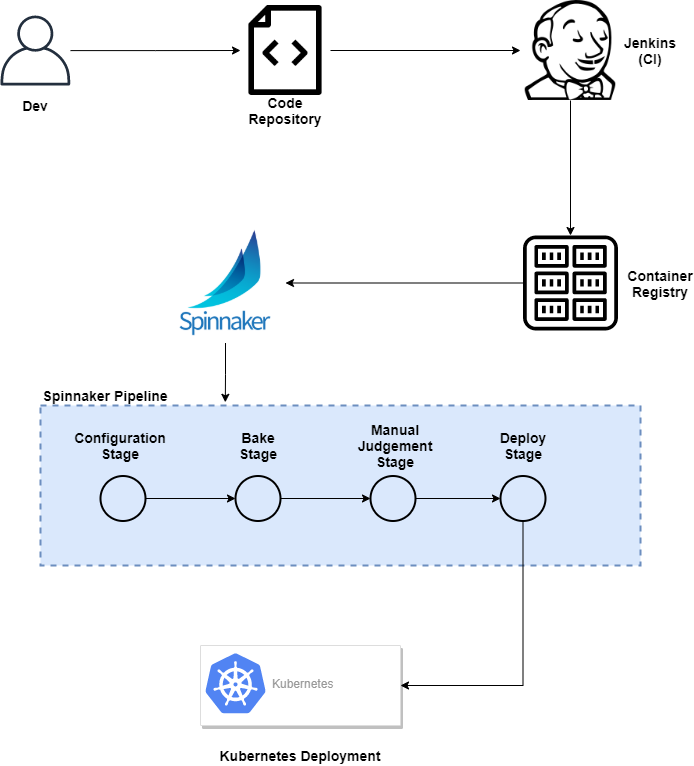 Let’s look at each step of the workflow:

Creating a solid CI/CD workflow allows developers to easily automate almost all the stages of the development and deployment process.

On top of that, leveraging tools like Spinnaker, which offers a solid continuous delivery pipeline with Kubernetes, will lead to faster, efficient, and less error-prone software development lifecycles. Refer to the official Hello Deployment tutorial for a complete deployment pipeline setup.

(Set up your own CI/CD pipeline.)

In this section, let us expand the above workflow a bit further. Consider a scenario with the following requirements:

We can simply configure a Spinnaker pipeline to accommodate all the above requirements, as shown below. 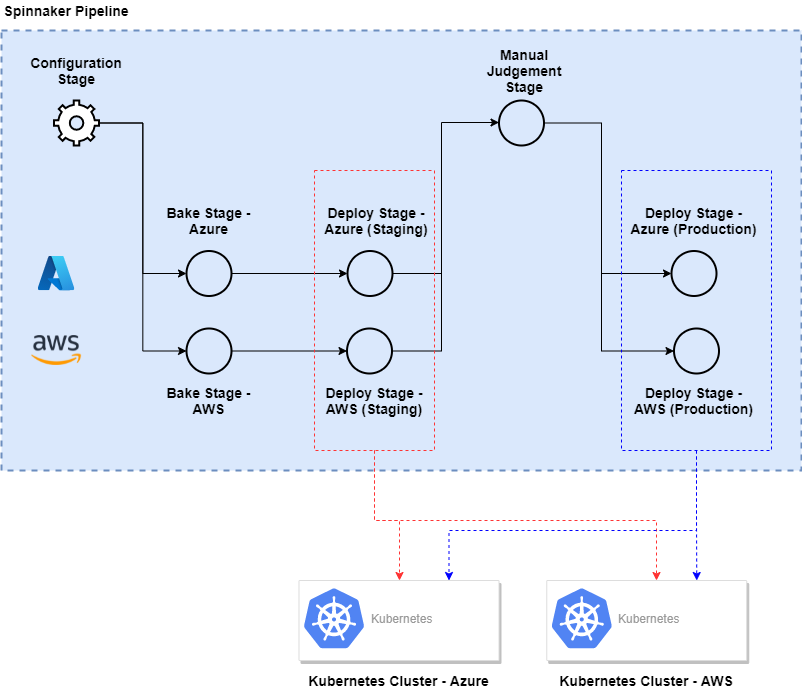 In the above pipeline, we have defined multiple stages to accommodate deployments in two different cloud providers. (This is possible all thanks to Spinnaker’s robust multi-cloud support.) Once the initial configurations are made, the pipeline will execute multiple stages simultaneously to bake and deploy the images in Kubernetes clusters in both Azure and AWS.

Then, you can verify the images and staging deployment at the manual judgment stage and finally deploy them to the production environments of AWS and Azure. Spinnaker’s capabilities eliminate the need to create separate pipelines or define different workflows to handle deployments and infrastructure in multi-cloud deployments. All the necessary configurations and infrastructure are managed through Spinnaker.

These pipelines can then be further extended to provide notifications to inform the DevOps teams of the pipeline progression, deployment state, and so on.

Moreover, the ability to integrate chaos monkey allows developers to easily test the resiliency of a deployed application by simulating instance failures and address any identified issues.

The use cases for Spinnaker are endless. Whatever the requirement, Spinnaker can be adopted to facilitate it. Spinnaker can even be deployed inside a Kubernetes Cluster and utilize pipelines to deploy applications in the host cluster itself.

The combination of Spinnaker and Kubernetes helps users to achieve the end goal of having a robust and automated CI/CD pipeline for containerized application deployments with baked-in best practices.

We can enjoy the following benefits by leveraging these two technologies.

Get the most out of containers

Spinnaker and Kubernetes complement each other to get the best out of containerized application deployment. Spinnaker is the leading platform for managing multi-cloud continuous delivery with an active community that includes Netflix, Google, Microsoft, etc.