Here we will install ElasticSearch and Kibana using Ubuntu 16.04 and ElasticSearch 7.0.1. At the bottom are some troubleshooting notes.

ElasticSearch has become a public company now, having made an IPO and sold shares. One of its first actions was to create ElasticSearch version 7. Unfortunately the installation instructions for how to set up a cluster with version have changed. So we have written new instructions. The main difference from what we wrote below is there is no need to add any discovery plugins or configure those.

(This article is part of our ElasticSearch Guide. Use the right-hand menu to navigate.)

For this example we have two servers. Change the names and IP addresses to match your environment. Don’t use loopback address as we will make a cluster of two servers. Instead use their internal IP addresses.

And we have this public IP address so we can access Kibana from the internet:

Start ElasticSearch on each server:

Check the cluster status. You should see 2 nodes if everything is working.

Replace the config file /etc/kibana/kibana.yml with this:

Start Kibana. It might take a minute or longer to start.

It might take a few minutes to download the graphics and to start Kibana as well. The dashboard will appear: 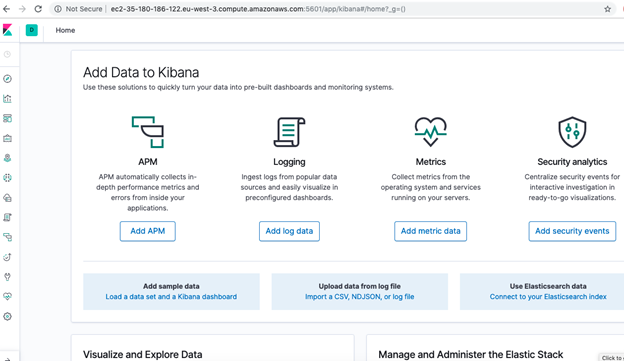 The next steps before going to production would be to increase the memory size to ½ of the memory of the machine (recommended by ElasticSearch) in /etc/elasticsearch/jvm.options by changing the values below.