Every year, software company Puppet surveys over 2,000 DevOps practitioners to summarize salary trends within the field. Although focused on DevOps career positions, the survey covers a variety of subcategories, including salary trends surrounding genders, countries, industries, and more.

Puppet recently released the findings of its 2020 DevOps Salary Report, which saw some surprising results despite being in the middle of a global pandemic. Interested in learning more about its effects?

Read on to find out.

The salary report is designed to reveal trends about how DevOps is impacting the business world through the scope of salaried positions and their momentum. The survey dives deep and covers a number of different sections, including trends by:

Overall, Puppet’s 2020 DevOps Salary Report points out that tech salaries increased globally, despite the pandemic and business delays. In fact, a majority of businesses surveyed reported that they accelerated their digital transformation initiatives by 3-4 years in order to better meet the needs that the pandemic demanded, pushing tech to the next level.

Key findings revealed in the DevOps Salary Report this year include:

Among the biggest concerns of the last 1-2 years? How the global pandemic would affect businesses and customers as we know it. It turns out, most of the tech sector actually saw benefits from the increased reliance on remote technology.

“The biggest surprise was that despite all the layoffs and major shutdowns, tech salaries increased worldwide, particularly for upper-income respondents in the U.S., UK and Japan.”–Alanna Brown, co-author of the State of DevOps Report

“While that might seem counterintuitive to what you’d expect during a pandemic, the truth is organizations have had to accelerate their digital transformation efforts, and those that have successfully pivoted are succeeding—in part because they’ve filled their talent gaps, leading to a corresponding rise in salaries.”

(Read all about The State of DevOps today.)

Although DevOps is an umbrella term for a methodology and culture, a wide variety of job positions can be included underneath this description, such as:

Let’s take a look at some salary trends.

As for the highest paying job in the DevOps field, Puppet’s survey revealed that platform engineers are at the top of the list, typically getting paid an annual salary of more than $150,000.

“For the first time, platform engineers have emerged as the top earners in our report, surpassing DevOps engineers and software engineers,” Brown said. 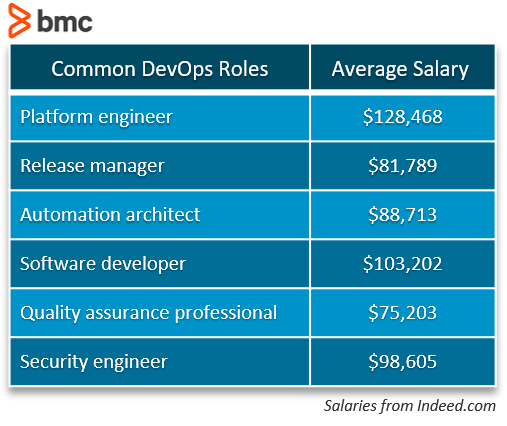 For industries that are seeing the highest salaries—those working in life sciences, pharmaceuticals, and healthcare (LSPH, for short)—have seen a huge uptick in compensation.

“The pandemic brought into sharp relief the necessity of digital transformation and thereby the value of the skilled practitioners and managers who make that evolution possible,” continued Alanna Brown.

“We’re seeing higher compensation as a result of the increase in demand for these skills, with the most dramatic rise in salaries for engineers and practitioners working within the life sciences, pharmaceuticals and healthcare industries who, for the first time, are earning more than their counterparts in tech and financial services.”

Indeed, according to responses, more than 64% of workers within the LSPH fields earn over $100,000 per year, compared to 53% of workers in the financial services industry.

One of the common themes of this year’s survey compared to last year’s is that of the continued pay gap across genders. While more women are earning mid-range salaries than men, the top earners are still men.

“We hope to see the next year bring greater gender equality in terms of salaries,” Brown said. “While this report shows women earning more midrange salaries than men, they have much lower representation in the upper salary range.”

There is no doubt that salaries of those careers within the DevOps fields increased worldwide. As far as DevOps salary trends by country, the steepest gains were seen in upper-income respondents in Japan and the United Kingdom.

In general, those DevOps practitioners in the United States continue to earn the highest salaries around the globe, with:

Overall, the global pandemic proved to push businesses to further develop and embrace their digital transformation initiatives, launching tech companies, and salaries, into the stratosphere. As organizations continue to depend on their digital technologies, the practitioners that make them happen will only further become more crucial, a benefit for anyone seeking a career in DevOps.