Technology is evolving faster than ever. People depend heavily on the internet for all kinds of regular tasks, from shopping to banking and healthcare. That’s made it critical for service providers to fulfill this ever-increasing consumer demand—which itself is coupled with:

Another trend is microservices-based architectures, where applications are built as multiple loosely coupled services. In this article, we will discuss the role of microservices in the DevOps process.

DevOps is a paradigm shift in the way organizations approach software development, deployment, and maintenance. DevOps shifts the whole software development lifecycle (SDLC) to a more collaborative process. Unlike in traditional SDLC, where Dev, QA, and Ops teams are considered separate individual entities, a DevOps team consists of cross-disciplined team members who bring their unique talents to the DevOps process.

This makes the DevOps team much more flexible and helps bridge the communication gap between larger teams such as Dev and QA. This ultimately leads to a faster, agile, and more efficient development environment with predictable deployments and update cycles.

DevOps offers a multitude of benefits for an organization. However, to gain those benefits you must properly implement DevOps with standardized concepts and proper tools such as:

(Learn how to set up a CI/CD pipeline.)

The core components related to development and management will remain the same. But the technology stack you’ll use in an application will change depending on your:

In this section, we will cover the core areas that need to be considered when creating a DevOps pipeline.

Version controlling is the cornerstone of any DevOps process. Technologies like Git and code repositories like Bitbucket, Azure Repos, and GitLab make it easier than ever to manage the source code. These tools allow developers to work without conflicting with each other’s work while providing version-controlled changes to the application.

Even database code is now managed with version-controlled repositories as a part of the DevOps process. We can sum up version controlling as something that:

The second major consideration is automation, as DevOps rely on automated tasks for faster development. The DevOps team must try to automate any repetitive manual tasks and be constantly on the lookout for new tasks that can be automated.

For example, automated tools like Selenium, Appium, and Cucumber can significantly benefit the application testing stage as they allow users to automate most test cases. Furthermore, automation: 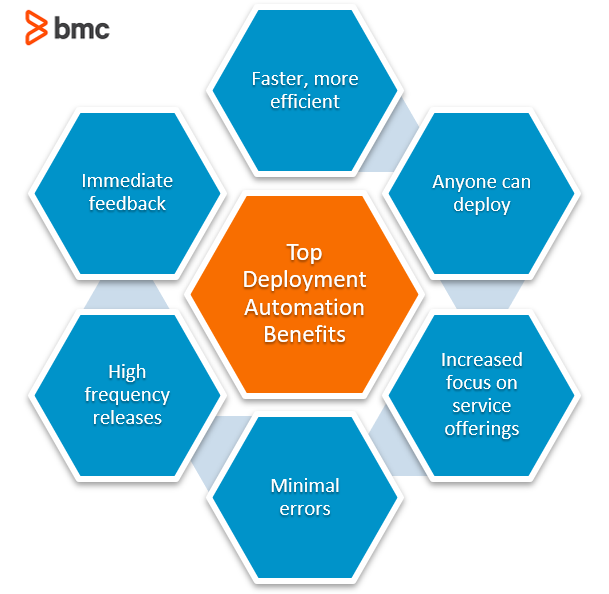 Containerized applications are one of the factors that power this shift to cloud-based deployments. Containers allow users to create isolated and portable application environments that can be deployed anywhere with all the required dependencies. Platforms like Kubernetes and Rancher provide robust orchestration capabilities for containerized deployments. Here, automation also plays a major role by automating software packaging and deployments.

A version-controlled and automated DevOps pipeline with a proper deployment strategy allows organizations to create a pipeline that encompasses all the stages of SDLC. Now that we understand the primary considerations of a DevOps pipeline, let’s see how microservices affect all these factors.

Microservices is an architectural approach to development that contrast with traditional, monolithic applications (where the entire application is considered and developed as a single entity). The microservice architecture breaks the application into different loosely coupled services. 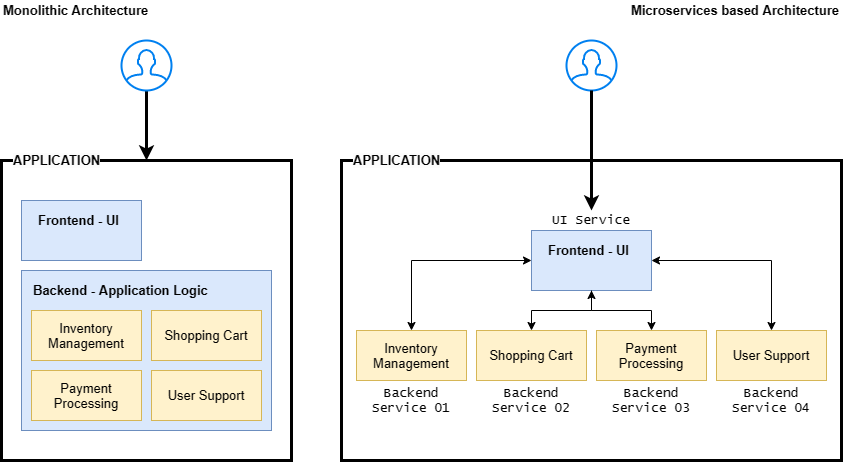 The DevOps approach is ideal for Microservices-based applications as it allows for easy development, provides seamless updates, and manages each service without the risk of complete application failures.

Role of microservices in DevOps

In order to understand the role of Microservices in DevOps, let’s consider a DevOps pipeline for developing a microservices-based application.

The first thing that microservices changes is how organizations approach development. As everything is broken down into separate services, development teams can also be divided to tackle each service. This will, in turn, reduce the scope of the development while making the development process more flexible.

This flexibility allows DevOps teams to address issues effectively. For instance, when a production bug is discovered, the development team can fix that bug in the affected service and deploy the service without affecting the SDLC of other services and causing minimal downtime. Moreover, if any service requires a new feature, developers can develop and deploy it in production without affecting the development process of other services. This decoupled approach simplifies the development and testing process while allowing services to be modified independently.

Containerization is another factor that extends and complements microservices-based architectures. Packaging each service as a container image further reduces the complexity while streamlining the continuous delivery pipeline.

Services can act as fully independent entities with all the dependencies and requirements bundled within the container. This makes the services system-agnostic and reusable while allowing them to interact with any other system.

APIs are another factor that goes hand in hand with microservices. With decoupled services, users need a robust communication method to communicate between services.

APIs enable developers to expose only the relevant endpoints and information while hardening the service and providing a universally compatible interface. This also becomes a concern when creating reusable system-agnostic services.

(See how microservices rely on APIs.)

Next comes automation. In a microservices architecture, most testing, packaging, and deployment tasks can be automated for each service. As each service resides in an independent DevOps pipeline, any issues in a single automated task do not affect the other services. Plus, feedback loops become much shorter when addressing bugs with the simplified codebase.

The stages at which microservices shine most with automation are deployment and maintenance. An automated task will be triggered in the deployment process to deploy the service as a container once all the testing is done and the container image has been uploaded to a container registry. This simplifies the deployment by eliminating the need for specialized network configurations or dependency management prior to deployments.

Finally, the availability and scalability of the application automatically increase with service containers deployed in clusters and managed via an orchestration platform.

This allows scale-out strategies without relying on scale-up strategies based on resource increases which are cost-prohibitive.

Microservices are perfect for DevOps

Microservices architecture is tailor-made for DevOps with its services-based approach that allows organizations to break down the application into smaller services. This enables delivery teams to tackle individual services as separate entities—ultimately simplifying the development, testing, and deployment. (This doesn’t mean microservices should be used for every application, however. They do come with certain challenges.)

The role microservices plays in DevOps includes streamlining the DevOps process and increasing productivity and quality of the application while moving developments to a flexible architecture. This leads to the development of cloud-native applications that are capable of fulfilling any user demand.