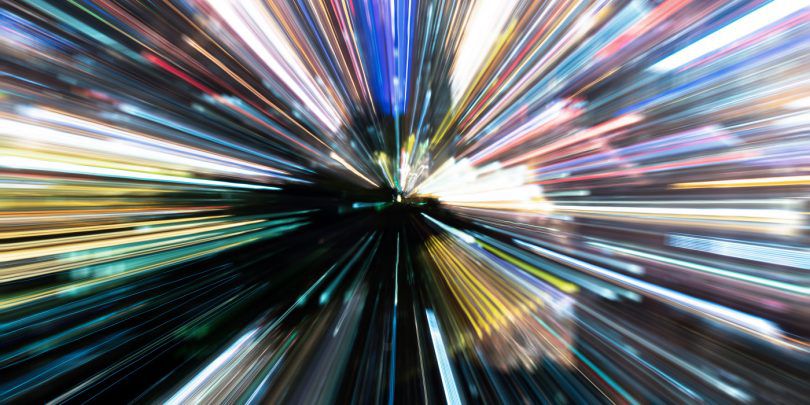 In this article, we’ll cover the basics of the Lua programming language, including: 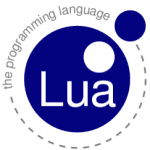 Popular use cases for Lua include:

Being a scripting language, Lua does not have its own main application. Instead, it acts exclusively as an embedded part of the host application.

(Explore the most popular programming languages.)

There are two main components of Lua:

Usually, the compilation is done at the runtime. However, sometimes it can be done before the runtime to increase load times. Then the Lua virtual machine will run this compiled bytecode. The register-based architecture of the Lua virtual machine closely resembles actual hardware architectures, and it will increase the overall performance of the program.

So, what’s so great about Lua? These are the defining features: 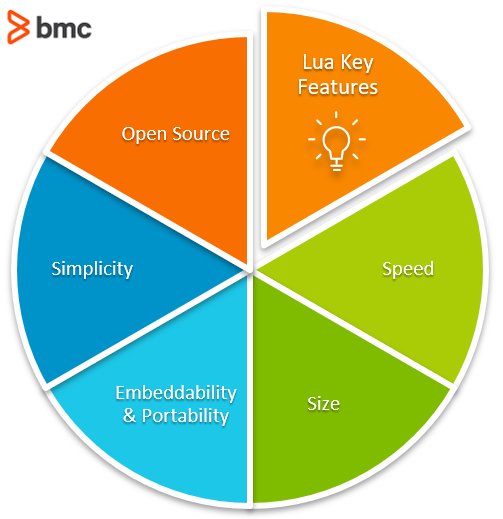 For more speed, an independent implementation of Lua called LuaJIT uses a just-in-time compiler that makes Lua even faster.

Lua has a considerably smaller footprint than other programming languages, with its complete source code and documentation taking a mere 1.3 MB. The Lua interpreter with all the standard libraries takes 278K, while the complete Lua library takes only 466K.

This small size is ideal when integrating Lua into multiple platforms, from embedded devices to massive game engines, where every byte is valuable.

With its small size, the portability of Lua is nearly unlimited; any platform that supports the standard C compiler can run Lua out of the box. Lua’s speed and size become huge advantages when embedding Lua with another programming language. That’s because they can help increase the speed of the program without hindering any existing functionality.

Lua is simple in design yet provides powerful functionality. One of the core features of Lua is meta-mechanisms which enable developers to implement features—rather than providing a bunch of features directly in the language itself.

Lua also comes with incremental garbage collection, reducing memory usage and implementation complexity. Its sandboxing feature can be used to isolate functions and resources. This increases the security of the program and provides coroutines for multitasking.

All these features come with a simple syntax and easily understandable format so that anyone can easily pick up Lua and use it in their programs.

Lua is free and open-source software distributed under the MIT license. This means anyone can use Lua for any purpose without paying any licensing or royalty fees.

Like any language, Lua has its pros and cons.

When to use Lua

As a scripting language without major limitations, you can use Lua for any scenario, from a simple backend script in a web server to complex game development.

Lua is highly prevalent in video game development as it can be used to create functionality without contaminating the overall performance while also keeping everything separate.

Another area that Lua excels is embedded programming, where size and performance are major concerns. Lua can be used in everyday applications to extend the existing functionality or create new features and functions.

Lua vs other languages

How does Lua stack up against other languages?

Here’s a look at the differences between the high-level general programming language Python, the high-level object-oriented Java, and web-focused Javascript—all compared to Lua. 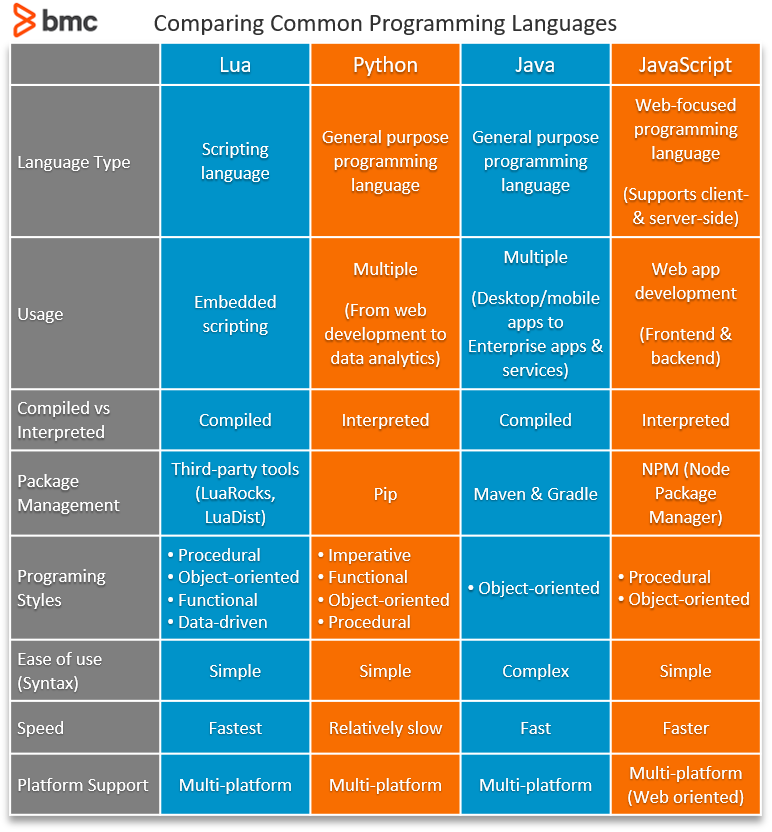 Now, let’s see how to set up a development environment in Windows. First, we’ll install Lua.

Navigate to the Lua.org download page. Here, we will be using a precompiled binary to install Lua in windows. So, click on “get a binary link” as shown in the below screenshot. 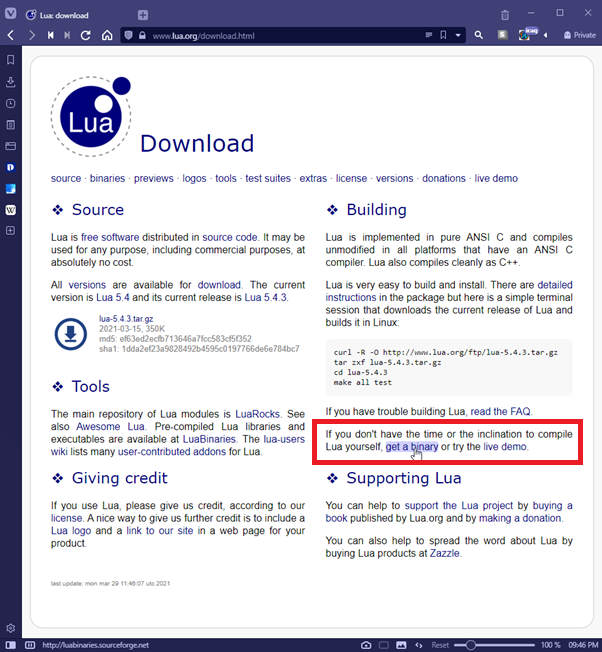 We will be using the latest Lua version for Windows 64 bit. 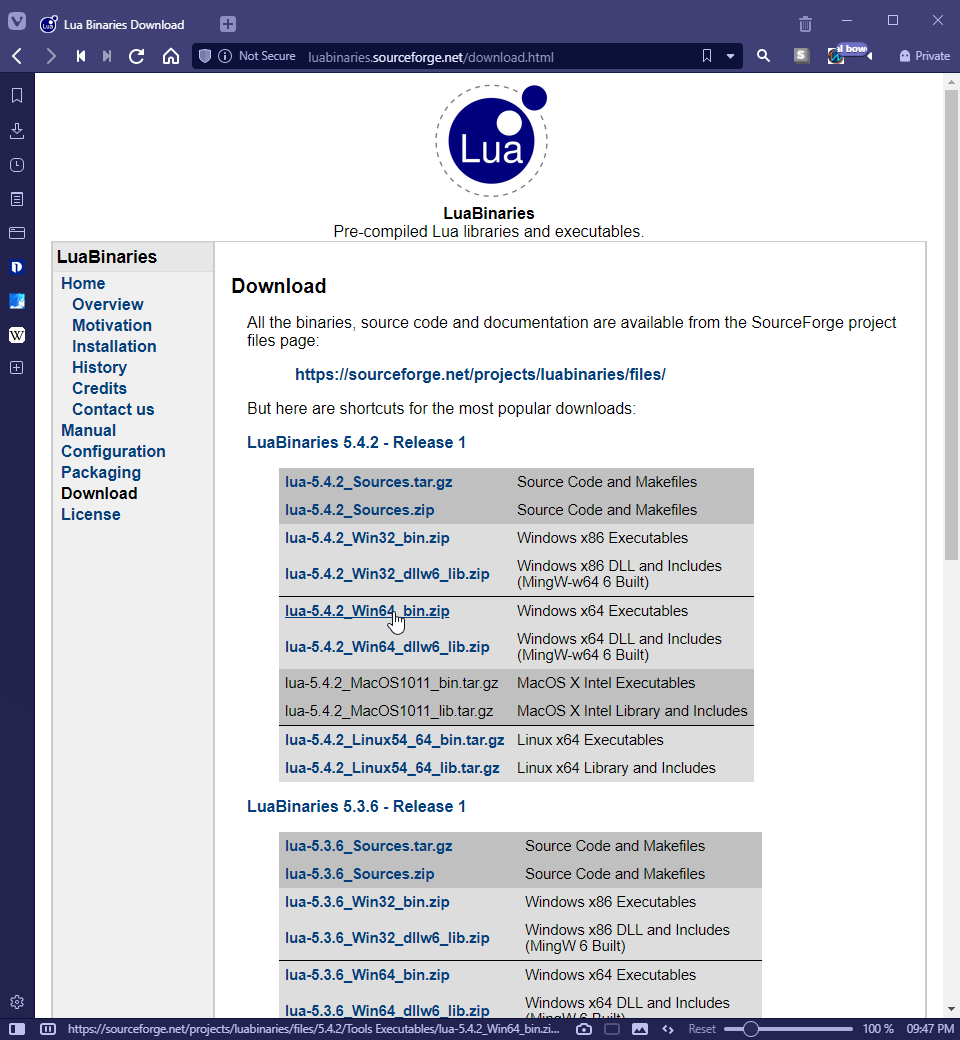 This will direct the user to a SourceForge page, where the binary will be downloaded. 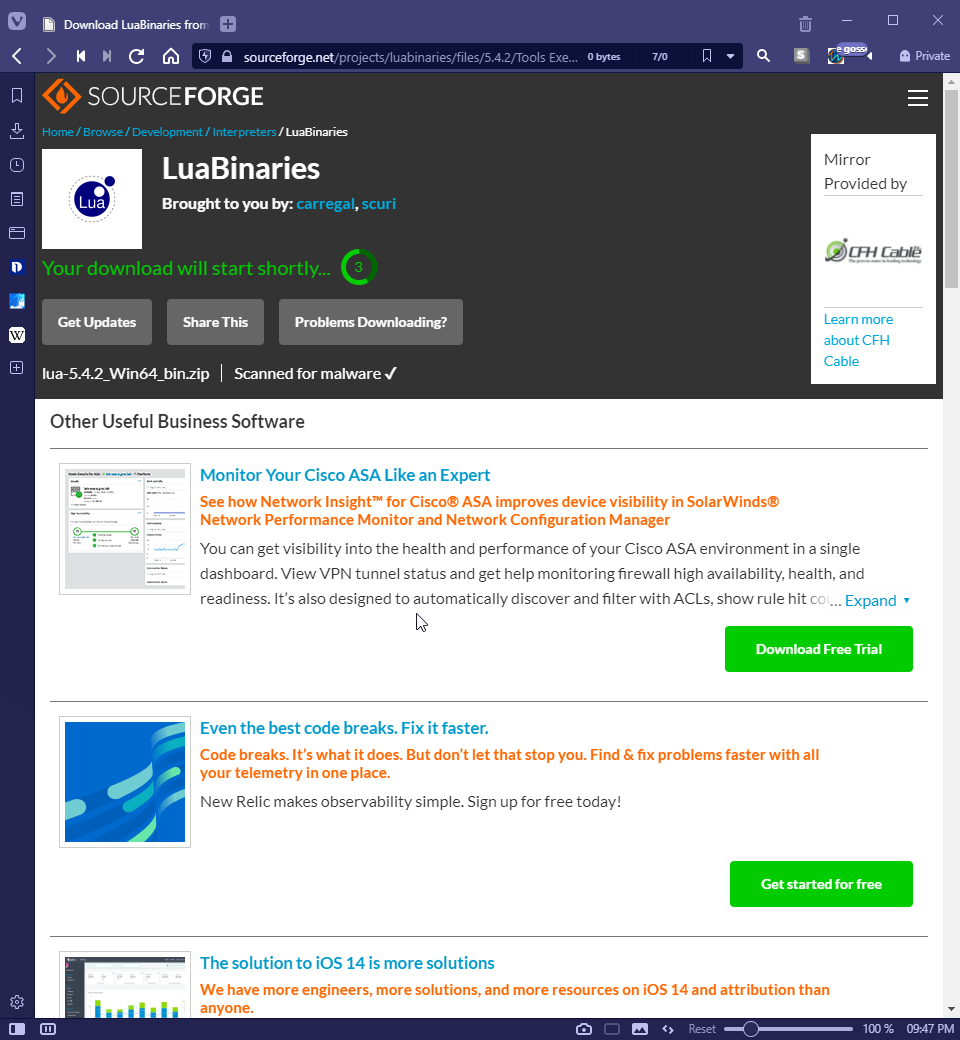 Move the downloaded Zip file to any location to store the binaries permanently.

Here, we will be using the “D:\Program Files\Lua” as the location. After moving the Zip file, simply extract its content using any compression utility (Ex: Windows Explorer, 7zip, WinRar). 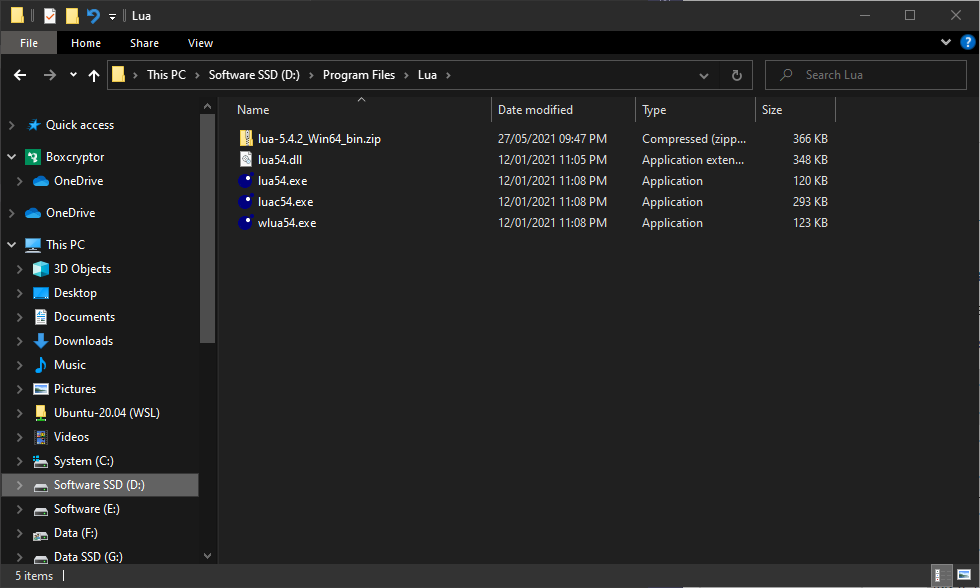 We need to add the location of Lua binaries to the system PATH so that Windows can call Lua from anywhere in the system. 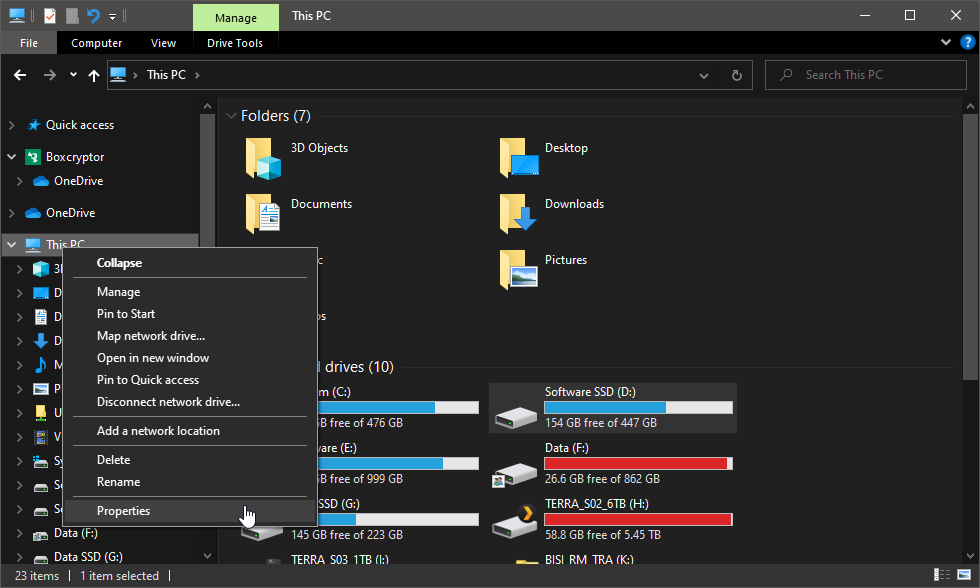 Step 4.2. Click on “Advanced System Settings” in the screen that appears and then click on “Environment Variables”. 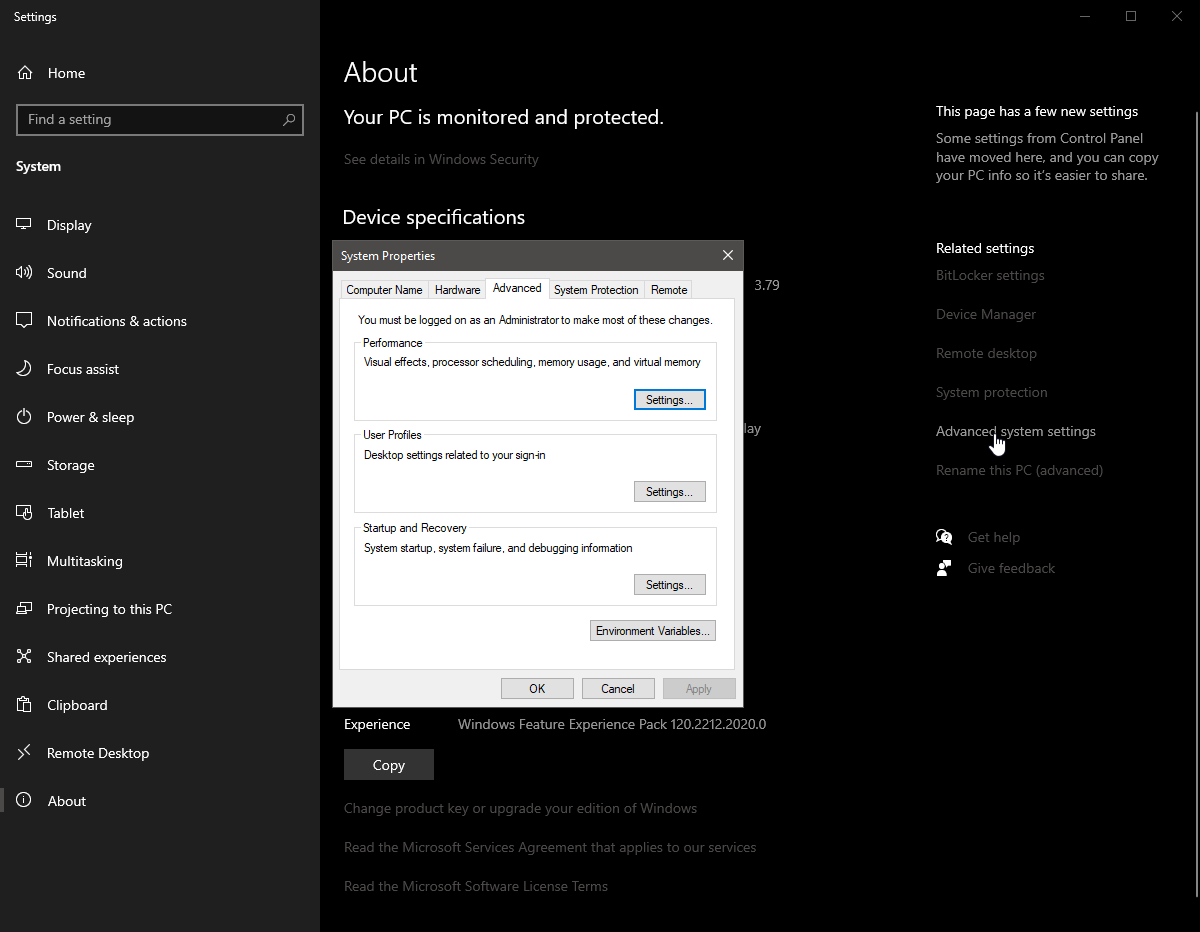 Step 4.3. In the system variables section, add the location of the Lua executables as a new entry for the Path variable. 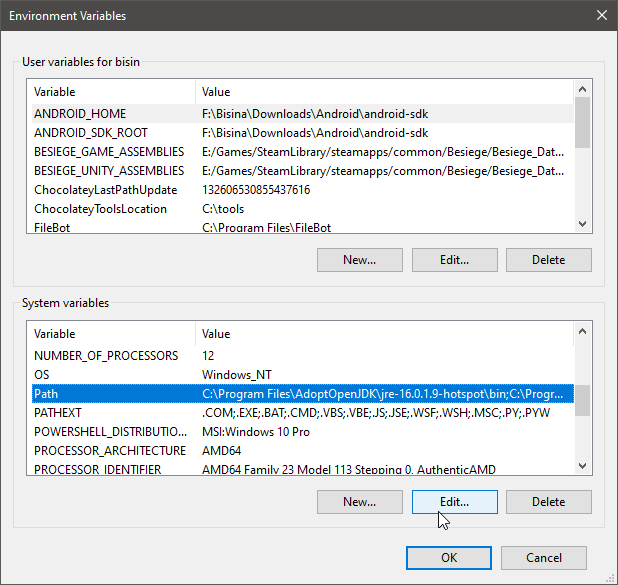 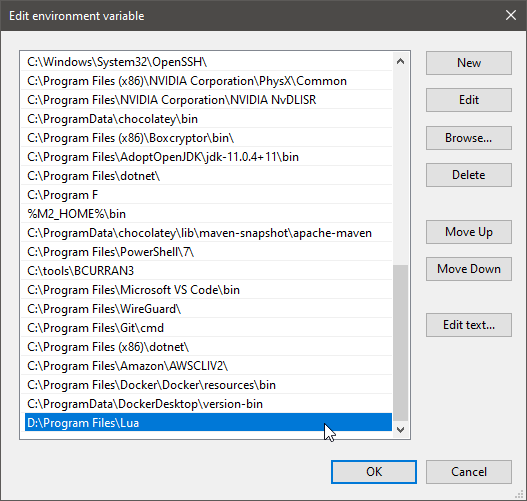 Check if the system identifies Lua by opening up a command prompt or a PowerShell window and typing the Lua command (Lua with the version – lua54). 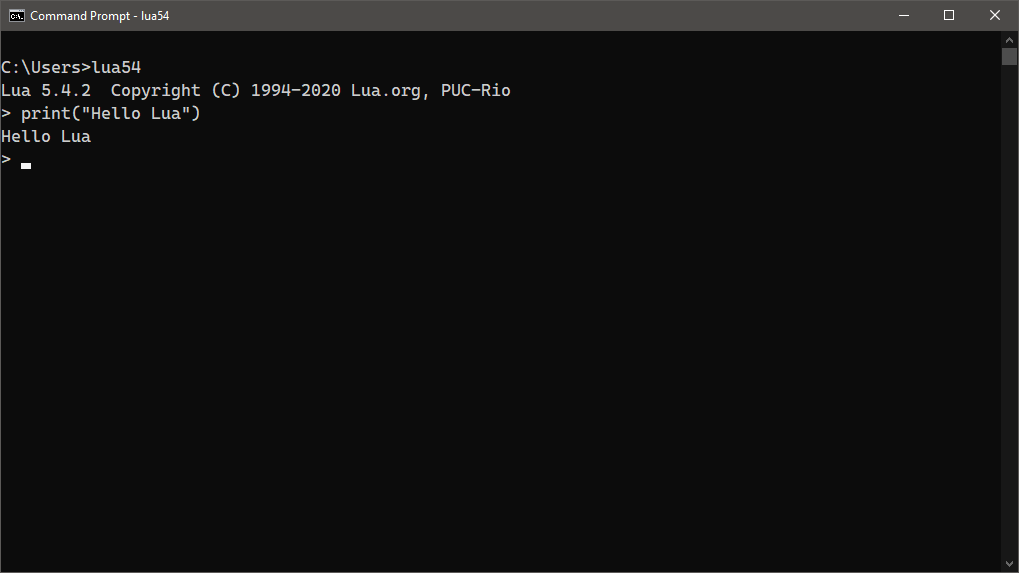 Setting up a Lua development environment

Now that we have installed Lua in the system, we need a development environment to go ahead with coding. For that, we can choose between:

We will be using VSCode for this instance.

Let’s create a file called “lua_basic.lua” in VSCode and save that file in the desired location. Then we will type some print statements there like the following. 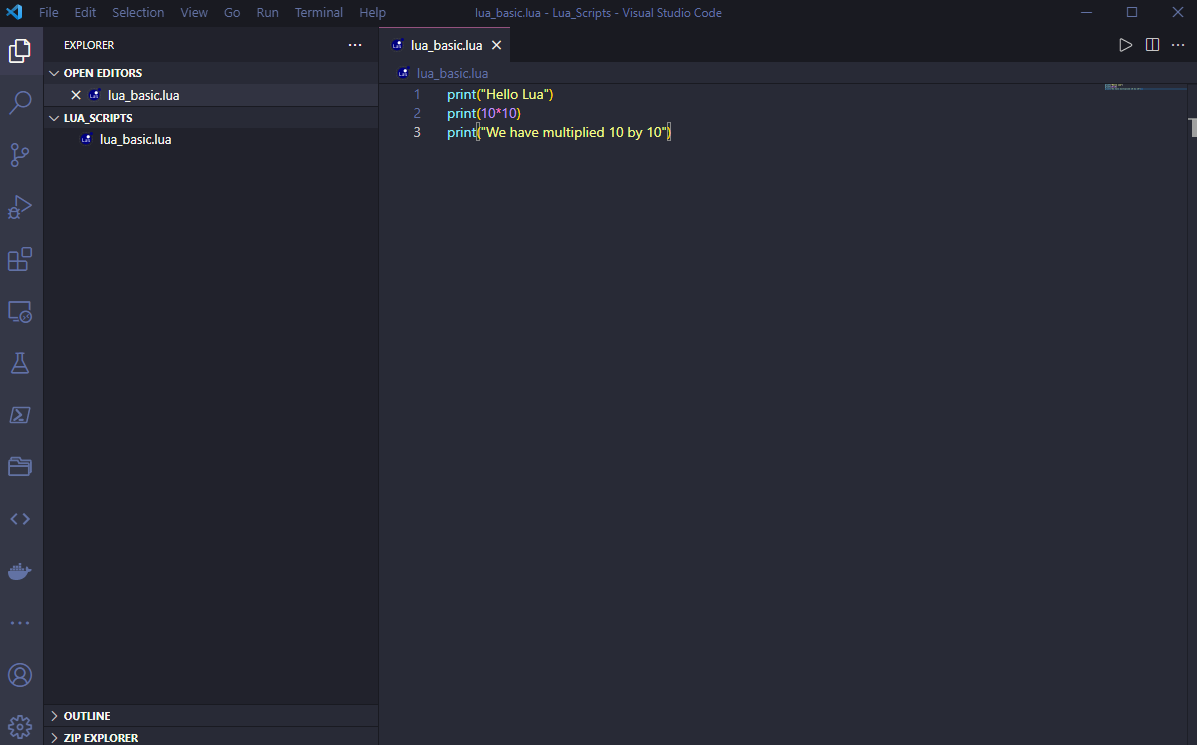 Our Lua program needs to be compiled before running, so we need to create a Build Task. To do that, click on Terminal Menu, then Run Built Task and select the Configure Build Task Option.

( There will be different build task templates depending on the VSCode configuration. Select “Create tasks.json from template” and finally the “Others” option to define a custom build task.) 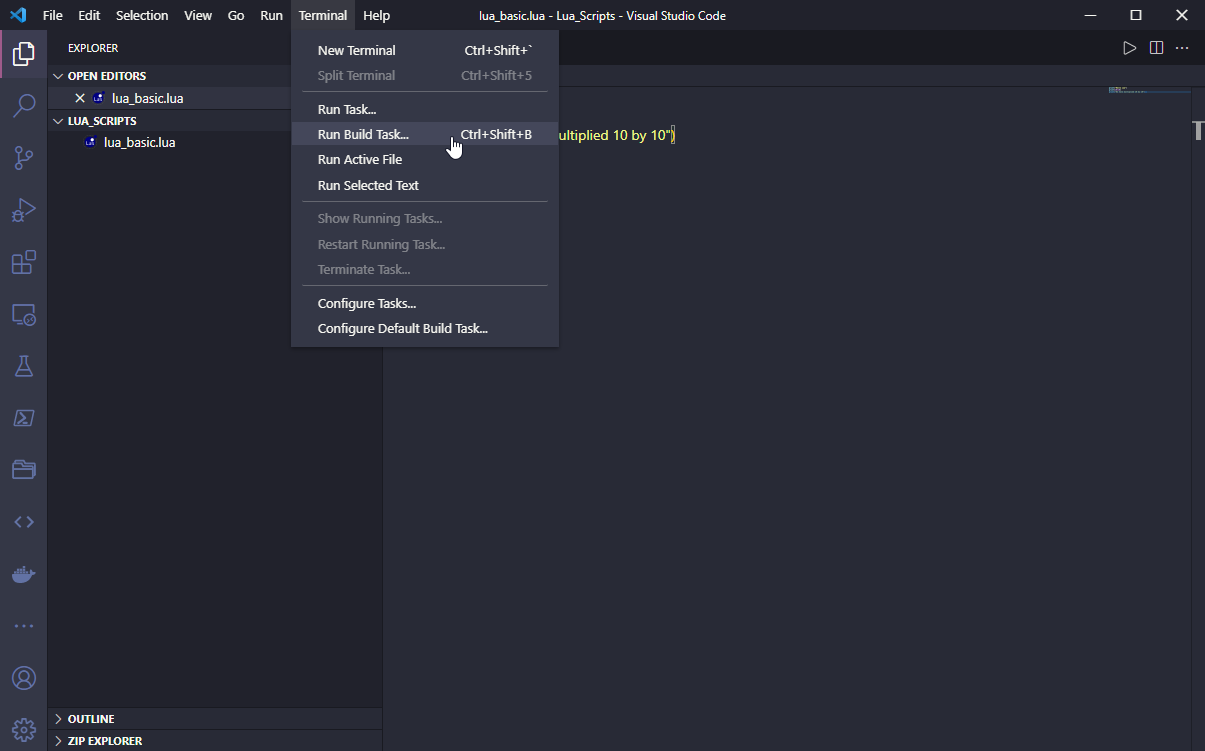 Step 2.1. We will add the following code block to configure the task. In that code block, we have defined a task called “Run Lua” that will run on the shell with the command “lua54”. That command will take the current file as the argument and carry out a build operation.

Open up the “lua_basic.lua” file again. Then go to the “Terminal” again and click on “Run Build Task” or use the shortcut Ctrl+Shift+B.

This will compile the file and provide us with the output. 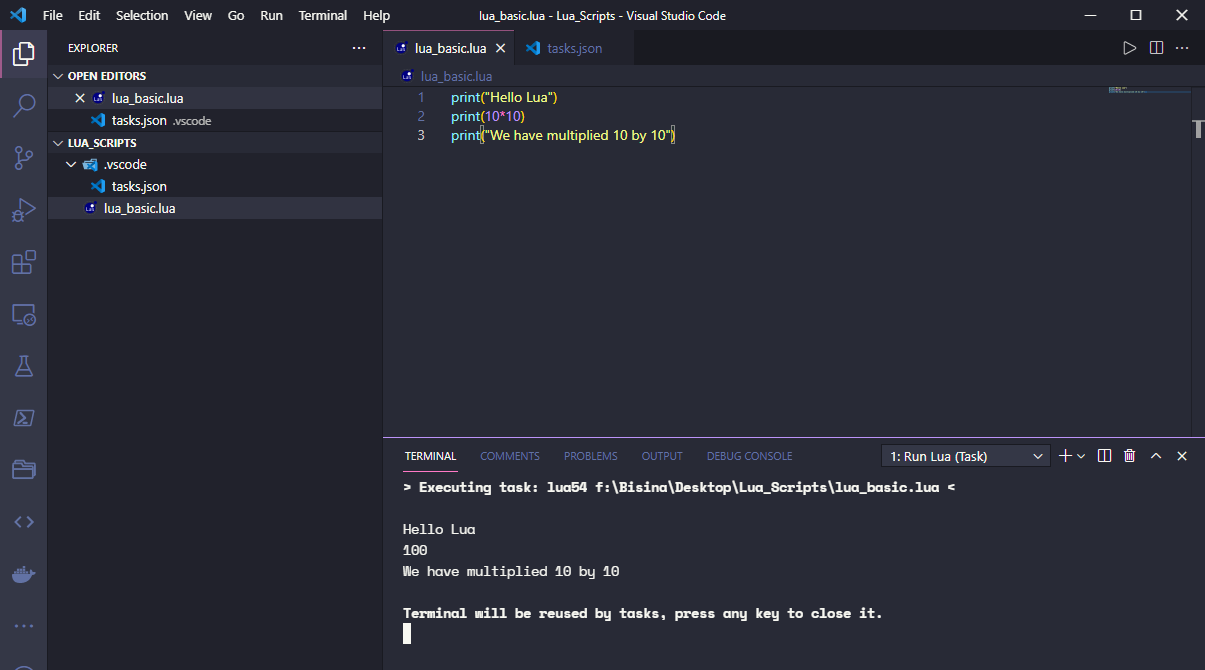 That’s it! Now we have a working Lua development environment that can be used to create Lua scripts. We can use the official Lua reference manual to explore the Lua language further.

Lua is a powerful scripting language that has limitless potential to add functionality to any program on a multitude of platforms to suit any use case.