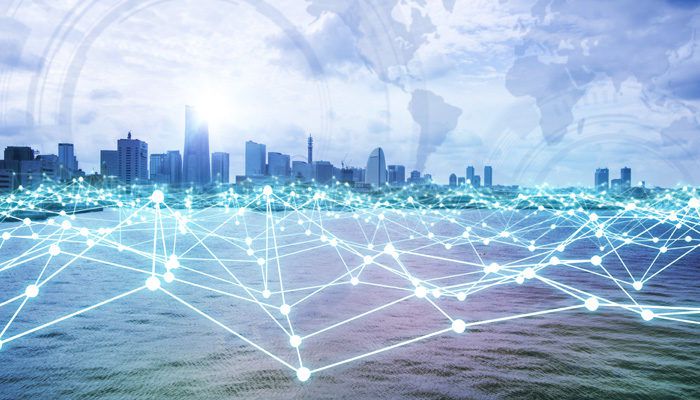 With the rise of smart technology, the term ‘smart’ is being applied to all sorts of things: smart phones, smart cars, and smart homes – made smarter by a whole host of devices and appliances that connect to the internet, for purposes of efficiency.

Cities aren’t immune to this buzzword, either. When it comes to technology and urban life, casual onlookers and tech enthusiasts alike may assume a smart city is a bustling place of interconnectivity, where WiFi is speedy and reliable no matter where you go. Transit is a smooth combination of mass public systems and ready-to-go electric bikes and scooters, making life easy and allowing citizens to work, live, enjoy, and travel throughout the city comfortably, securely, and quickly.

Ideal as that sounds, smart cities aren’t necessarily outposts of bold development, funded and created by private companies. Instead, smart cities are harnessing the architecture and the technology of enterprise IT to address big issues facing big and small governments today, like cost reduction and resource management.

What is a smart city?

Across the globe, urban areas are growing at rates never before seen. As cities continue condensing, managing resources is ever more necessary, for the sake of the people in the city and for the larger environment.

Cities increasingly want, and need, to enhance the performance, quality, and interactivity of services, in order to reduce cost and resource consumption. Governments must be smarter and act more efficiently in many areas, such as traffic and transit systems, power, water supply, and waste management, and services like law enforcement, schools, and libraries.

Building a smart city requires a deft balance of entrepreneurial decision making and spending alongside the structured worlds of enterprise IT and local government, though these are clearly structured in very different ways. By partnering city needs and data collection with IT and communication that the IoT and cloud computing offer, cities can harness the power of enterprise IT to manage assets and resources more effectively, efficiently, and affordably.

Today, the most common applications of smart technology show up in parking and energy meters, traffic lights, online applications, and even RFID sensors in city sidewalks. Intelligent processes know when something goes down, like a traffic light, and automatically create a work order, decreasing down time. While these aren’t altogether impressive or innovative on their own, together they contribute to a city-wide feeling of data put to use smartly. Plus, as these efforts succeed, cities are likely to invest more in larger or more visible options.

The goal of benefiting the local government may seem one-sided, but these improvements actually enhance the lives of community members, too. City officials can monitor current city situations and the city’s evolution, and citizens can interact more closely with elected officials and civil servants, often in near real-time.

Stockholm-based EasyPark, a smart-parking technology firm, ranks the 100 smartest cities in the world. This may look a little more like the exciting technology the private sector enjoys: their rankings compile data on a range of factors, including clean energy technology, communication through smartphone penetration, speed and reliability of cell service, and availability of WiFi hotspots.

The compilation isn’t just raw data. The rankings consider a city’s population, living standard, and overall culture and attractions, and asks thousands of tech and lifestyle journalists to rank the cities, too. In 2017, Copenhagen was deemed the overall smartest city for living, but other locales stand out for particular parts of smart tech, like Luxembourg and South Korea, which have the highest use of smartphone tech. Smart parking technology is best in Montreal, and Singapore deploys cutting edge smart technology to maintain their world-class public transit infrastructure.

Top smart cities in the U.S.

So how does the U.S. rank in the Smart Cities Index? In 2017, Boston came out on top of all American cities, ranked 5th overall, with particularly high nods for local education, innovation in the economy, and transport and mobility. Two spots behind, San Francisco scored big for its transit options, digitalization, and tech-friendly economy.

Many of the top-ranking smart cities rely heavily on private spending. But some U.S. cities are starting to incorporate enterprise IT into local government functions, too:

It’s one thing for a city to have a goal of becoming smarter, but it’s another thing to make it happen. Nearly two-thirds of American cities are investing in smart technology, specifically on the government side. But it’s unclear whether this refers to a single, smaller initiative or a wider, multi-focused effort that crisscrosses a variety of city services.

Deploying enterprise IT is just as tricky in the public sector as in the private sector. Like companies, governments are starting to realize the need to deploy enterprise-level options for IT. But deciding what that means for larger goals and public spending is a major barrier to getting started.

Industry experts say to remember the goal: opting for enterprise IT at the city level should combine the best of technology, entrepreneurship, and local governance. That can mean thinking like a system, as IT and city service require, but being ready to jump in and take risks once the higher decisions are made. An overall goal or vision for the city is useful, but determining exactly the right architecture to make it happen can paralyze the effort before it starts. Implementing smaller pieces to make small improvements. Once successful, go bigger.

Pittsburgh is a perfect case study for choosing to get smarter: the city began developing its vision in the 1990s, as the industrial economy the city relied on collapsed. Choosing technology as a major focus was an iterative process that involved public and government officials, academics, philanthropists, and area and national businesses. The slow, intentional accumulation of talent in science, engineering, technology, and specifically artificial intelligence has resulted in today’s city, hailed as the center for emerging innovation and AI.

Concerns for cities embracing smart IT

Technology is long-wave innovation. Rushing innovation for the sake of rankings, public spending, or constituent votes doesn’t ensure success, but once the building blocks are in place, emergence can happen radically. Consider a major piece of smart technology: your smartphone relies on semiconductor technology that took 50 years to develop, but it only 10 years, over 2 billion people globally use smartphones.

Still, becoming a smart city is not without problems. Retention will be the most difficult problem for city governments employing enterprise IT and, more and more, artificial intelligence techniques.

Recently, Uber and Facebook have built out their own AI labs in Seattle, San Francisco, and Pittsburgh, and the academic communities there are feeling the effects. For a generation, it was the colleges and universities who began and are leading the current AI revolution, but funding that these worldwide behemoths offer ensure that private AI will be the next revolution.

The money and benefits these brands can offer to professionals in science, computer programming, engineering, and AI are significantly more than colleges and local governments can offer.

Of course, one current issue is that the demand for such talent is far outpacing the supply – which is beginning, if slowly, to change. Carnegie Mellon University just unveiled an undergrad degree in artificial intelligence, the first of its kind, but a good idea of what we can expect from other leading tech and engineering schools.