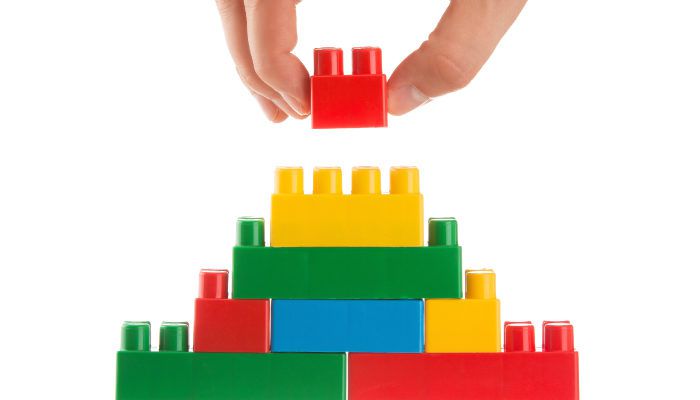 React, aka React JS, is a JavaScript library designed for building user interfaces in web applications. It focuses on powering the view layer of the MVC (Model-View-Controller) architectural pattern.

React is based on reusable elements called components that help to create fast and scalable user interfaces—something many developers love.

So, in this article, we will:

When to use ReactJS

React is aimed at creating robust and extensible user interfaces (UI) across multiple platforms. One bright spot of React is that it does not limit users to a specific JavaScript framework. React also:

React is the ideal choice for creating cross-platform, responsive, versatile, and scalable applications when it comes to application development. 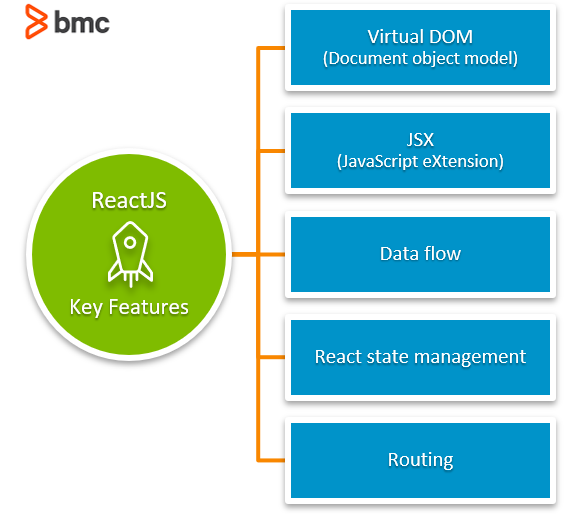 To better understand React, we need to know about the components that power it. So, in this section, we’ll go through the core concepts and features of React.

The document object model (DOM) is the core part that represents the complete structure of a web page document in any web application. It defines the logical structure of an HTML or XML document and how they are accessed and manipulated, enabling developers to target specific elements and objects with a document directly.

This approach further allows developers to update specific parts of the DOM tree without having to load the complete web page—resulting in:

This reduces overall load times even further and leads to fast, responsive designs.

JavaScript eXtension (JSX) is a syntax extension for JavaScript. It enables developers to define HTML structure within the JavaScript code. JSX also simplifies the development process by:

While JSX is not mandatory in React, it is widely adopted because it allows developers to define UI elements with JavaScript. JSX is also used for creating React components.

In React, data is handled according to the “properties flow down, actions flow up” principle. React passes a set of immutable values to the components renderer as properties. The component cannot directly modify these properties, and developers can utilize a call-back function to request modifications.

All React components have built-in states. This state simply refers to the data structure within the component. State management in React provides a way to both:

Every React function or class consists of a state. It’s essential to properly manage the state across the web application as the state of a component can be changed by a user action (user interaction with a UI element).

React offers powerful state management libraries that can be easily integrated into a web application to provide enhanced control over function and class states. Common libraries include:

One of the crucial parts of a good application is the ability to navigate between pages easily.

Usually, developers will use the History API within a browser to facilitate this navigation (routing). However, the feature set and functionality offered by History API are quickly outmatched when dealing with complex applications.

React provides a feature called React Router in its standard library to facilitate routing functionality. React Router is an API that enables developers to create a routing layer for the application. On top of that, it offers additional features such as:

Building blocks of a React application

Next, let’s look at the building blocks that go into any React app.

Components are the core building block of a React-based UI. These components are analogous to JavaScript functions. Each component will accept a set of defined inputs and return a React element that will be rendered in the frontend.

The built-in React object in each component contains data about the component. As state relates to data of a component, any changes to data (state) cause the component to re-render. User interactions or system events will cause changes in the state, and it will directly impact the behavior and visualization of the component. 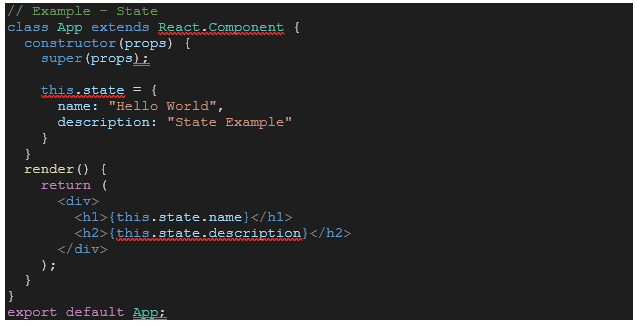 In React, “props” is short for properties, which is a built-in object that stores the attribute values of tags. Props can be analogous to HTML attributes. These props can be passed to components as inputs to facilitate functionality with a component similar to traditional method arguments.

Example of passing username as an argument for the component:

Simplicity & ease of use

React is comparatively more approachable than other frameworks and libraries. The only prerequisite to learn React is a basic understanding of HTML, CSS, and JavaScript. Even if React uses the powerful JSX syntax, developers do not have to use it. Instead, they can start using React with plain old JavaScript.

React is built with performance as a core tenant, as we see in features like the virtual DOM, data flow, and server-side rendering. React applications render faster by only reloading necessary components of the DOM tree. This drastically reduces the load time on the frontend, promoting a smoother user experience.

Additionally, React ensures that child structure changes will not affect the parents with its single-way data flow. Those changes are encapsulated within the child structures, with states controlling the modification of components. This makes the application more stable, and it increases overall performance.

React has the ability to run on the backend server to render and return DOM to a browser as regular HTML. This helps mitigate search engine optimization (SEO) issues inherent to JavaScript-based applications, thus increasing the application’s SEO.

React has a robust ecosystem that contains numerous libraries that can be used to easily integrate various functionalities to a web application, such as:

On top of that, UI components libraries such as KendoReact and Rebass enable developers to add ready-made, robust components to their applications without having to build everything from scratch.

All these libraries are managed through npm, which is the largest software registry.

React offers a comprehensive toolset to support the development and debugging of web applications. It has many tools designed to simplify the software development lifecycle (SDLC), such as:

You can also easily integrate React with tools like VSCode, Atom, and WebStorm to create a proper development environment. Finally, React starter kits like React Static Boilerplate and Rekit help developers to kickstart the development of a React-based application.

React has evolved beyond just web applications. Now, React Native supports mobile UI development for both Android and iOS. This allows developers to create JavaScript-based UIs for mobile applications that will render with native code.

The following table illustrates a comparison of React with other JavaScript frameworks.

The easiest way to get up and running with your React app is to use the Create React App CLI tool. It will create a React project with a simple application structure that can be used to build an application.

This will install all the required packages and create a sample folder structure for the React application. 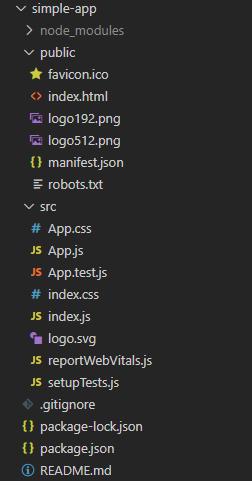 The App.js file is the primary file in the React application. In the sample code block below, we import the logo and CSS classes and then use the App() function to render and return the elements. 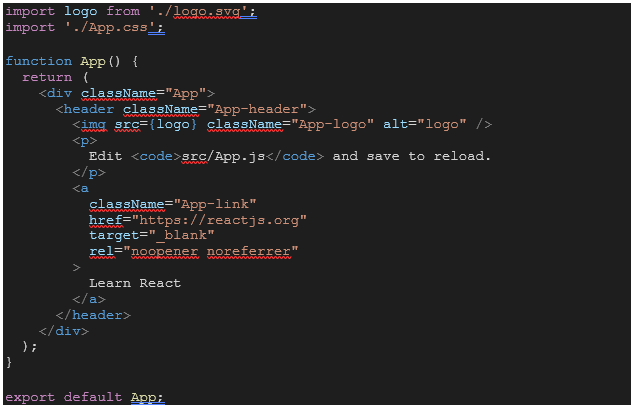 If we look at the index.js, we can see that it points to the App function and renders it in the frontend.

Then we can run the application by running the npm start command, which will: 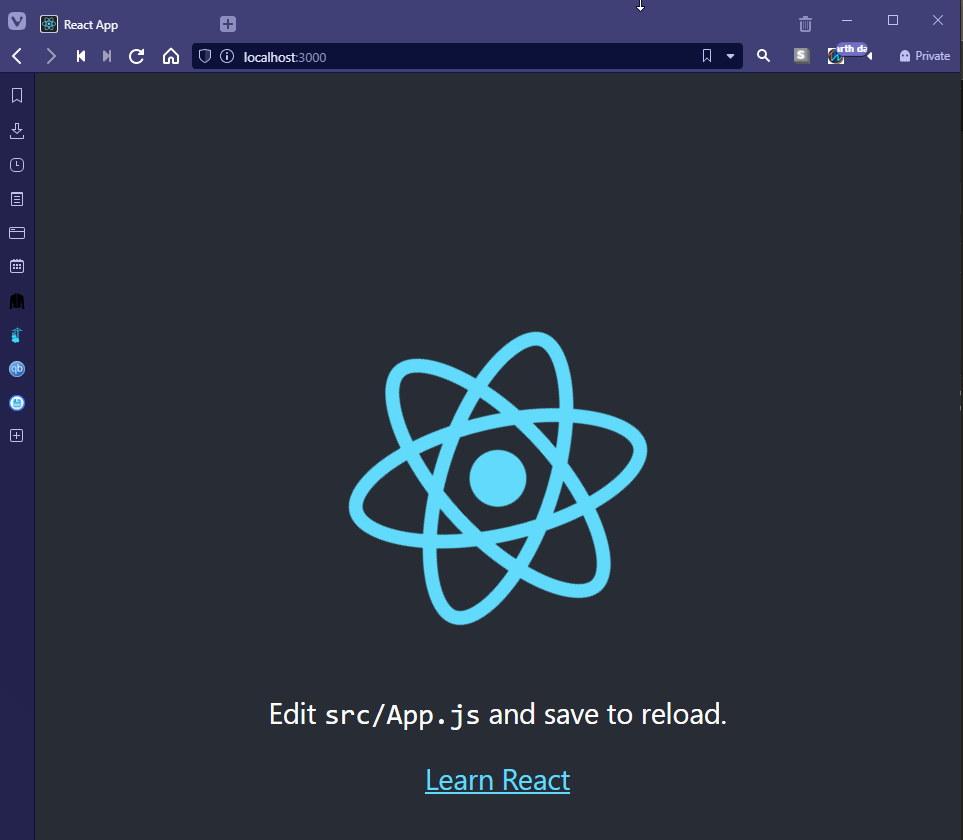 Now, let’s modify this application by creating a new file called Home.js and rendering it as the output.

We are now importing the newly created Home.js file and rendering it in the index of the application. The result will show:

React is for all developers

Though React isn’t something you want to use for every application—indeed, simpler apps are best—developers appreciate React for being easy to learn, use, and integrate within their existing environment.